A Day in Mystic Falls

If you have clicked on this blog post you have probably seen the Vampire Diaries or have previous knowledge about the show. My sister and I have rewatched the show countless times growing up which made us realize we needed to see the town in real life. Because lets be real, who doesn’t want to be Elena with both of the Salvatore brothers at her feet. Once I found out that “Mystic Falls” or in real terms, Covington Georgia was a real place I started to plan our trip. I did sooo much research for this trip and want to recommend the things we did that helped make it such an amazing day and a half. I did not count on the place we stayed to be haunted but thats a story for later on….

I really do believe I have found the best place to stay if you want the entire “Vampire Diaries- Mystic Falls” experience. The best place to look is the Twelve Oaks Bed and Breakfast. This is where multiple scenes of the show were filmed and each room is decorated a different theme based off the characters in the show. This place was PERFECT and only a half a mile from town. I did this walk multiple times in heeled boots and it was easy. Ellie and I stayed in the Salvatore Brothers room because how could we not? The room looked straight out of the show and had us obsessed from the first step inside the room. We arrived at the bed and breakfast around noon, dropped our stuff and headed out for the day. Our weird experience with the place didn’t happen until later that night:)

1. Mystic Grill: We had to eat at Mystic Grill, which unlike the show is right next to the bell tower. Many people have had mixed reviews on the food there but we enjoyed it. Maybe we were just starving from our red eye flight but the burger I had was amazing. The staff was super friendly which added to the whole experience. Upstairs there were autographed menus by the casts from The Vampire Diaries, The Originals and Legacies.

There is an upstairs patio that over looks the bell tower and the town square. We spent so much time up there because it was so pretty. We took so many pictures at the upstairs patio.

2. City Pharmacy: After walking around for a bit we were hungry for dinner and City Pharmacy was so so good. We got the cheese board as an appetizer (of course) and a salad for dinner. I wouldn’t go out of my way to recommend this place if it was mediocre, so I definitely recommend if you are in Covington. We walked back to the bed and breakfast after and it was unreal seeing the tower at night. Literately felt like Elena Gilbert, Iconic.

3. Bread and Butter Bakery: We went here for breakfast in the morning to grab our vampire inspired latte. We both got the vampire slayer lattes which were amazing and it was such a fun atmosphere inside the coffee shop! We had to make sure we got the whole super fan experience!

Locations we walked by:

I am not saying to go stalk these houses or the people who live there but we were able to walk by and feel like we were in the show.

– Caroline Forbes House: The house right next to Elena’s, across the street.

– Lockwood Mansion: There were two for filming, the Twelve Oaks Bed and Breakfast where we stayed and the Worthington Manor. You can only get access to the Worthington Manor with a tour guide. Vampire Slayer has great recommended tours but we had decided to walk around ourselves. We still took pics out front for fun.

1. We went to the Vampire Stalkers (where tours are also held) and bought energy drink blood bags for fun. The store was so cute and had everything Vampire Diaries down to wooden stakes. Unfortunately all of the tours were sold out when we went but I have heard great reviews about them!

2. Right under the Mystic Grill is the cutest Vampire Diaries inspired shop with the nicest owner. In this store you are able to see all of the casts clothing and special special pieces from the show. They also have candles themed to each character which we thought was so funny. Out of the many souvenir options we ended up buying a T-shirt and glass that we both use way more than we want to admit….The owner was very sweet and helped give advice on where to go in town. If you are in Covington this is a must!!!!

Now back to the Twelve Oaks Bed and Breakfast:

As a disclaimer,I just want to say this is my personal experience and I am not making any allegations. After a long fun day of walking around in town we went back to the room to shower and look at the souvenirs we had purchased from the gift shop. I believe we were the only ones staying at the time because all of the other rooms were wide open and dark. The bed-and-breakfast had a kitchen and snack area on the third floor. We were staying on the first floor and were excited to go microwave our popcorn and watch some Vampire Diaries. We wanted to watch all of the episodes that were filmed at the Twelve Oaks. We made our popcorn and went back downstairs. It was so surreal watching the show while laying in bed at the same location the show was filmed at! It was getting late and we knew we had a busy day ahead of us. We wanted to wake up early to be able to go to the coffee shop that specialized in the Vampire Diaries inspired coffee drinks before we had to leave Covington. We had also planned to visit the Salvatore Boarding House outside of town on our way out. We plugged in our already charged phones across the room because there were no outlets accessible near the bed. Lastly we looked at the clock for the time and went to bed. In the middle of the night I woke up very disturbed from a bad nightmare. I was screaming and crying in my sleep which has never happened to me. My sister woke me up panicked unsure of what was going on. I have not had bad nightmares in the past so I felt uneasy but was able to drift back off to sleep. I truly thought maybe the red eye was catching up to me in some weird way…

The next morning we woke up feeling very out of sorts. We both recall the morning like we were still stuck in a dream with no gage of what time it was. I looked at the clock and noticed it said 8 o’clock. My heart stopped realizing we had overslept our alarms by two hours. I jumped out of bed upset, knowing that we had to be up early. I rushed over to look at my phone and noticed both were completely powered off….. weird. My phone has never randomly done that. I was confused at first because they were both charged when I put them on the charger and there was no new phone updates. I powered both phones on to see that the time was 12:38 pm. Somehow in the middle of the night the clock got messed up, our phones were completely powered off and I had one of the worst nightmares of my life. Weird. We were so upset that half of the day was already over and we had to rush to leave. We got ready fast and went into town to grab the Vampire Diaries inspired coffee because caffeine was needed after the night we had. On our walk to Bread and Butter Bakery, I googled to see if anyone else had had any strange experiences at the Twelve Oaks that involved power shortages. My heart stopped when I saw that there were multiple articles claiming that the place was haunted. After looking at multiple stories I knew it was time to pack up our things and head out. We left shortly after with good memories of a great trip. I’m not making any claims or saying you should not stay here but this was just my experience. Overall the bed-and-breakfast and the trip entirely was such a great time!!

I hope some of this helps you plan your future trip to Mystic Falls!! 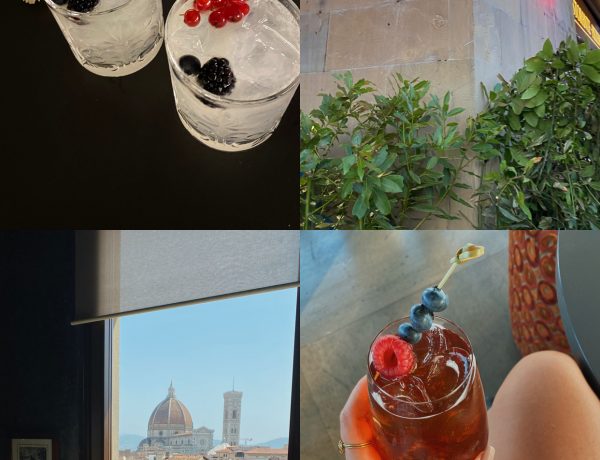